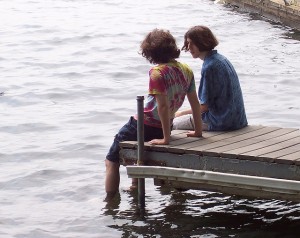 Spencer, Mark, and Swetha discuss letting go. We talk about how we were or weren’t able to let go of things in our life before we came to the program. Spencer identified the slogan “Let go and let God” as a tool that he could adopt early on. At first he could only use “Let go”. He kept telling himself to “Let go” when he was tempted to try to control his loved one’s drinking. Mark shared that, before he entered the program, he did a lot of “letting go” — letting go of his needs and responsibilities, really letting go of almost everything other than his attempts to control his son’s drinking. His fear for his son overwhelmed him, and all he could do was try to control. Swetha “let go” of everything that didn’t happen the way she thought it should and that she couldn’t control, ignoring and denying unwanted reality, or else accepting defeat. Mark agreed that he was also letting go of reality, because he couldn’t face it.

After she started working the program, she began to understand that accepting reality, letting go of unrealistic expectations, is healthier for her. Spencer found that as he let go of his attempts to control the drinking, his loved one seemed more likely to seek recovery. Not only did letting go make him feel better, but it paradoxically seemed to encourage change.

We talk about how we were able to begin to “let God” as we worked through the 2nd and 3rd Steps, accepting a Higher Power, and making a decision to turn our lives over to the care of that Higher Power. Mark talks about how much harder it is to turn the care of our loved ones over to a Higher Power, than to make that decision for himself. Letting go of control seemed petrifying to him. Swetha shares her journey from belief in God to disbelief, and back. Mark asks “well, then, who were you letting go TO?” Spencer and Swetha found some relief from just letting go of their actions that were not working. It didn’t necessarily take them to a positive place, but it was less negative, and that helped.

Mark had a realization one day that he was never going to have a “perfect family”, but what he did have was a family in recovery. He let go of the old vision, and accepted the new reality, which was perfect in its own way. We talk some about how this has worked in our lives, when we let go of our unrealistic expectations and visions, and accepted our true reality. We find happiness in our current lives, rather than misery from wishing they were different. Mark’s “sponsor-in-law” would say “you are exactly where you need to be”, to which Mark would say, “but I don’t like where I am.” And she would respond, “well, then there’s something you need to learn.”

We talk a bit about the value of open AA speaker talks to help us find hope for our loved ones’ recovery, which helps with letting go of our control. Their stories of recovery give us faith that we can truly “let God.” Swetha talks about the experience of hearing laughter from AA meetings, and getting hope from the joy that was expressed there.

In the segment “our lives in recovery”, Mark heard a newcomer speak of her experiences that were so parallel to his that he felt an immediate connection, letting him know that he is not alone. In another meeting, hearing a different part of his story through another person let him look at himself and pointed him to some work he needs to do for his own serenity. In her step study group, Swetha was reminded that she needs to ask her higher power to remove her shortcomings. Spencer shares that when he is asked to support another member, it helps him to strengthen his own program, too. He had several opportunities for that this week.

Next week's topic is Resentment. Please contact us by voice mail at 734-707-8795, or by email to feedback@therecoveryshow.com with your questions or experience, strength, and hope.

Music from the show